5 Ways to Know if Your Idea Could Become a Business…

This story appears in the November 2014 issue of Entrepreneur. Subscribe »

Gregg Brockway has launched major brands that address chronic problems in the travel sector. But it was the pain of moving house that led the co-founder of Hotwire and TripIt to tackle his latest venture. “We moved several times,” Brockway says. “Each time we moved, we would have furniture that just didn’t fit in our new house, and it was driving me crazy. My wife had spent a lot of time finding those [pieces], picking out the colors, the fabrics, and then we’d basically give it away or sell that thing on Craigslist or to a consignment shop.”

So Brockway launched Chairish, an online consigment shop for quality vintage furniture and home décor, along with his wife, Anna; former Hotwire partner Eric Grosse; and former TripIt partner Andy Denmark. “It was an idea that we had from personal experience [and] the pain around it,” Brockway says.

The idea paid off quickly. “On the very first day, we actually sold some of that stuff without any marketing … and the smallest amount of traffic you can imagine,” he says. “We were just, ‘Wow. We’re on to something.’”

The initial interest led the trio to believe that their curated marketplace could fly, even though they’d done little in the way of market research. “There are ways of looking at a business and seeing it’s working,” Brockway says. “Typically, it’s further along in a business. Most investors, they want to come onboard when you can show them that you make more money from your customers than it costs you to find them. When your business gets to that point, it is super easy. You’re off to the races. The hard part is, how do you tell if you’re on to something before the numbers start rolling in?”

We asked some experienced entrepreneurs to give us their criteria for moving ahead with a new business. Does your idea fit the bill?

1. Your idea solves a problem.

Truly disruptive ideas provide a balm for some kind of pain, solving a problem or making life more convenient, efficient or affordable. “At the very earliest stage, maybe you, the founder, are your only user,” says Jessica Livingston, partner in Mountain View, Calif.-based early-stage accelerator Y Combinator, which has funded more than 700 startups. “Maybe you’re building something to solve your own problem.”

But chances are that if you’ve noticed a particular problem that needs solving, others have, too. In 2013, Y Combinator funded a single-founder company called Medisas. Gautam Sivakumar, a physician, wanted to address a significant problem plaguing hospitals: the handoff of patients and their critical medical information to new doctors during shift changes, which can create confusion that leads to about 60,000 deaths annually.

“He started a startup to basically create software to facilitate this process so that there weren’t any mistakes in handwriting, and nothing got lost on a sticky note,” Livingston says.

Sometimes it takes tweaking to determine the real problem. When Lisa Falzone and her business partner launched San Francisco-based Revel Systems, the original plan was to sell an ordering app for restaurants. “We were in a meeting with our first client trying to sell him the ordering app,” Falzone says. “He was like, ‘That’s a great idea … but what I really need is a [point-of-sale] system.’ And he went on and on about how much he hated dealing with POS companies, and no one would call him back even for a sales call. I actually told him in the meeting that we would build it for him. That’s how we started it. We realized that the point of sale was a huge pain point. Therefore, we saw a great opportunity to resolve it and make people’s lives better.”

If you don’t think you can put in the time and energy to bring your idea to fruition, don’t bother. Livingston sees this situation often at Y Combinator. When a business isn’t growing fast enough for the founder’s liking, she says, “they come to us and they say, ‘I’m just not passionate about the idea of working in local coupons. It’s just not that interesting to me.’ I put my head in my hands and think, Then why did you start this?

“Honestly,” she adds, “you are going to go through so many problems and have so many people turning the screws on you and things going wrong throughout the life of a startup that if you don’t have a genuine love and a passion—and I hate the word passion, but I have to use it in this case—if you don’t have a passion for the idea, it’s most likely you’re going to give up.”

Jason Lucash, co-founder of Costa Mesa, Calif.-based OrigAudio, which racked up $750,000 in sales in its first year, suggests giving your idea time to percolate and running it past people you trust. “You want to sleep on it. Maybe wait a week,” he says. “Show some of your friends and family, people you really trust in your inner circle. Then if it’s still sitting pretty well with you, go out and try to pursue it.” 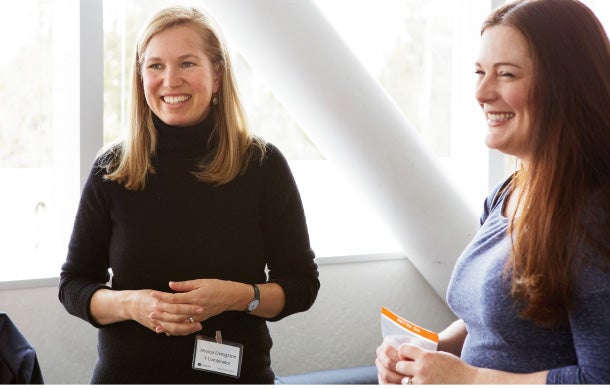 They’ve heard it all: Y Combinator’s Jessica Livingston (left) and a colleague.

3. People are anxious to get their hands on your product.

Other people need to be as excited about your idea as you are. “Do you have a small number of users who love your product? That’s usually a good sign that you’re on to something, and you can find ways to expand from there,” Livingston says.

Start testing the idea and showing the prototype to friends, family members and, as soon as possible, potential customers.

“I think you have to crank up the ‘Who cares?’ meter,” says Joan Schneider, CEO of Boston-based PR and integrated marketing firm Schneider Associates, which specializes in product launches. “How big is the market?”

As you start showing off your idea, listen for that elusive word: love. “It’s a really hard word to come by, but it’s super powerful,” Chairish’s Brockway says.

But don’t be put off if it doesn’t get hurled at you from every person you approach. This process is about finding people who will eventually want to buy your product (and become your evangelists and/or guerrilla marketers). People who get what you’re after will (with their dollars and feedback) help convince investors that you’re worth backing.

Validation won’t always come from where you expect: Brockway says “a lot of smart people” thought TripIt, which he co-founded in 2006 to organize itineraries and make travel easier, was “a dumb idea, particularly some of the more successful venture capitalists in Silicon Valley. They said, ‘Why do I need someone to organize my travel? I’ve got a secretary for that.’ But we kept getting all these e-mails from users who said, ‘I love this. This is so great.’ It gave us the confidence to keep going in the face of these smart people who just didn’t get it.”

That early testing phase can also help you understand potential selling points to highlight when marketing your product. When Lucash and his partner Mike Szymczak developed the prototype for the first OrigAudio product—sustainably produced folding cardboard speakers—they realized they had tapped into the consumer demand for eco-friendly, U.S.-made products, as well as the hot audio market. “We showed it to like 10 of our friends and asked them if they would use it,” Lucash says. “All of them were like, ‘This is awesome. I would totally use it. I think there’s mass-market potential.’”

4. You’ve kept it simple and responded to feedback.

“A lot of people say, ‘I could really build a better Expedia if I could just bring together air, car, hotel, destination, activities, customer reviews …’ Every one of those things is a big problem, and you can’t do everything well, so you end up doing nothing well,” Brockway explains. “I think that’s a big red flag if you just keep adding on features and functionality to your core product to try and make it more attractive to people.”

By scaling back on the bells and whistles from the get-go, you can avoid a lot of hassle, planning and spending. It’s a lesson Brockway and the TripIt team learned the pricey way: “We had a grand plan for making TripIt this really rich trip-planning application that brought together information from all these different sources and allowed you to plan the perfect trip,” Brockway says. “We put all this stuff together, and people weren’t using it. What they wanted was just a simple, vanilla online folder concept that helped them organize information.”

If, during testing, you find that users are focused on just one piece of your idea, consider scrapping the parts they ignore. “Sometimes you also see businesses where the overall metrics might actually be downright bad, but they might have a little piece of the product or a customer segment that really works, and by focusing in around that, it can have this scenic reemergence,” Brockway says. “You’ve got limited resources and limited time, and a great company can really only do one or two things well.”

Adds Livingston: “Keep it simple, launch quickly, get feedback from users out there, because nothing is better than launching and understanding how people are using your product.” For a role model, she says, look no further than PayPal. “When they started, you could transfer cash through PDA devices. They thought that they’d raise funding on that, and it’s just the way it was going to be. Then they got calls from eBay users saying, ‘Hey, I noticed your web version that you have as an example. We want that on eBay. We want to be able to accept money.’ Finally the founders of PayPal were like, ‘Oh, my God. This is how people are using it.’”

Is the market ready for you? “A lot of times ideas have been tried before, but unsuccessfully. Then they’re resurrected, and they work this time around,” Brockway says. If a past idea is nipping at your brain, figure out how the world is different today than when the idea fizzled the first time.

Influences might include emerging or widely adapted technology (Chairish sellers benefit from being able to snap and upload photos with ease from their smartphones) and new or updated legislation (such as liquor laws, healthcare mandates and the legalization of recreational marijuana).

Think of Airbnb, whose founders interviewed with Y Combinator in 2008. At the time, Livingston and her team thought, Huh, what a weird idea, staying on someone’s airbed. Would the crowdsourced, couch-surfing sensation have worked as well years earlier, before online ratings, ubiquitous photo posting and the social acceptability of meeting strangers on the internet? Probably not.

As the CEO of a startup, you can’t control whether you come up with an idea before its time. But you can look at trends and shifts that may signal the time is right to take your idea beyond the light-bulb stage.

Jenna Schnuer writes (mostly) about business and travel and is a contributing editor for Entrepreneur.

@[email protected]
Previous Plan How to Take Your Product to Market, Not Just to Potenti…
Next The Secret to Starting a Business Is Managing the Changes…