How Entrepreneurs Will Eventually Breathe Freedom Into Cuba…

For more than 50 years, strained US relations with Cuba have affected the way we do —  or, more to the point don’t do – business. With President Obama strengthening our diplomatic ties and hoping to lift the trade embargo entirely, the Cuba/US economic relationship will drastically change and affect more than just macroeconomics in the coming years.

Cuba has long been ripe with opportunity for entrepreneurs, without a lot of freedom to take advantage of that situation. The Cuban government has stated that the absence of trade with the United States over the last five decades has amounted to more than $100 billion. Even without the US embargo, socialist policies from the Cuban government have stunted entrepreneurial growth. Since 2006, Castro has lifted some of these restrictions, allowing limited business licenses. Unfortunately, in a country where the average salary is around $20 per month, the population has never been able to sustain small businesses.

With the possibility of more US influence in politics and economics, Cuba is on the edge of a revolution, of sorts. If the trade embargo is lifted, Cubans can export their products not just to the United States, but also to many other countries that don’t do business with Cuba based on agreements with the US. This opens up, literally, a world of opportunity for would-be entrepreneurs on the small island nation.

That’s not all. American business owners would then be able to export their products into Cuba, a market ready for new ideas and inexpensive luxuries that could change the way Cubans live. With our potential new trade partner only 90 miles away, shipping is not prohibitive even for small businesses. In 2012, the estimated Cuban GDP was $121 billion – small individual incomes, but not an insignificant starting point for the right kind of import. 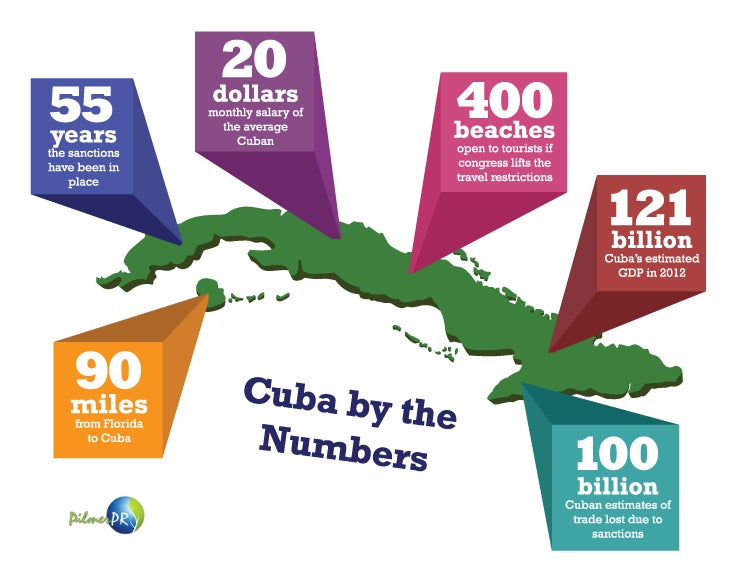 Let’s be real: the Cuban market isn’t going to blossom overnight, not with 90 percent of their economy controlled by the state, and foreign investment laws that only offer a glimmer of openness. Raul Castro has made it clear in no uncertain terms that communism is still the rule in the island nation. But obviously, many businesses are taking a second look at Cuba now that it’s not forbidden.

For marketers, this means learning more about the captive audience on Cuba, which might not be exactly what you’d expect. Cuba has one of the most literate populaces in the world. Their current top export is their  highly-trained professionals and athletes. Cuba is actually famous for the quality of its healthcare workers. More than 2 million Cubans already live here in America, and have particularly made an impact in Florida with their culture.

Related: What Will Franchising Look Like in Cuba? 3 Clues From Similar Markets.

It also means that the Cuban tourist trade might be a smart investment. For 55 years, the average American has not been allowed to take advantage of more than 400 beaches, including the world-famous Veradero Beach. Of course, Congress has not yet approved tourism travel to Cuba, but even without casual travel to Cuba, Cuban-Americans can now visit home and are likely to make the journey regularly.

With so much potential, it is only a matter of time before entrepreneurs here in the United States find ways of taking advantage of the new market nearby. Let’s not count out the Cubans, who theoretically will now have a much easier time immigrating to the United States. We have always been a nation of opportunity, and immigrant entrepreneurs have impacted our economy in massive ways. They have founded companies including Google, Intel and Yahoo, along with major fashion industries and real estate conglomerates. Possibly, hopefully, the next big idea may come from our new Southern partner as relations open, policies relax and economies begin to mingle.

@[email protected]
Previous How to Triple Your Sales by Knowing Exactly Whom You're…
Next This Entrepreneur Skipped College and Made $1,037,100 In Fiv…

How Blockchain Is Creating a New Future for Digital Marketin…

This Oscar-Nominated Screenwriter Shares His Thoughts on Suc…

Don't Be in Love With Your Product…

Artificial Intelligence May Reflect the Unfair World We Live…