Twitter to Disclose Who Paid for Ads on its Platform…

Amid criticism that Russia exploited Twitter to influence voter sentiment in last year’s election, the service will now clearly label political ads as such.

On a Tuesday blog post, Twitter said it’ll create an “advertising transparency center,” where the public can view all the ads that are running on the platform, and who paid for them. In the future, Twitter will also clearly identify tweets from a political account. 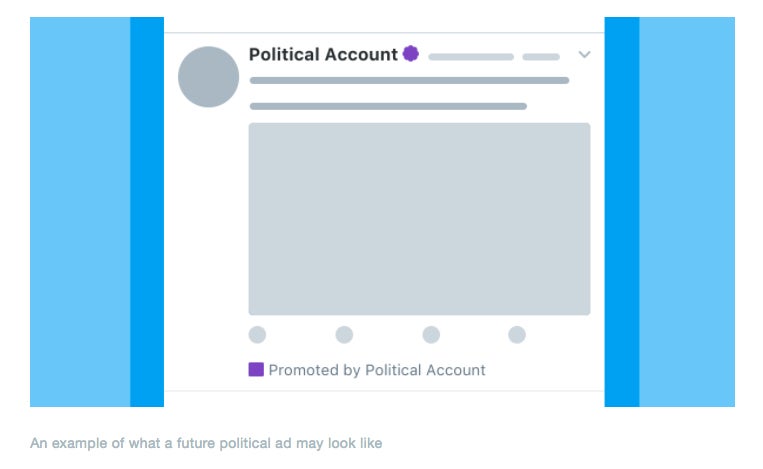 Twitter’s transparency center will have a special section devoted to these political ads. It’ll show who bought them, how much they’ve spent on total campaign ads and which demographics these ads have been targeting, including the age, gender and geography.

Twitter unveiled the plan days after U.S. senators introduced legislation that would require major online services to adopt similar measures. That includes forcing services like Twitter to create a public file on political ad purchases, and placing disclaimers on each ad, identifying who sponsored them.

The legislation is in response to Russia’s suspected role in using social media to interfere with last year’s presidential election. Some of those efforts included buying political ads on Facebook, Google and Twitter, but outdated campaign laws prevent the public from knowing who bought them, according to the U.S. senators behind the bill.

On Tuesday, Twitter said it’s also going beyond electoral advertisements, and will develop stricter policies around “issue-based ads.” However, this will take time, and it’ll involve collaborating with other tech companies, industry leaders and ad partners to clearly define what these policies should encompass.

Whether any of these measures will placate U.S. lawmakers remains unclear. But on Tuesday, Mark Warner, a Virginia Democrat who was critical of Twitter’s initial transparency efforts on this issue, praised the company’s announcement.

In the meantime, the company has vowed to crack down on another problem facing the platform: the influence of fake Twitter accounts spreading misinformation, another way lawmakers say Russia interfered with last year’s presidential election.

In response, Twitter has said it’s investing in new techiniques to fight bots and spam on the platform.

@[email protected]
Previous Unlike Many Things That Are a Lot of Work, Trade Shows Are W…
Next 5 Reasons Machine Learning Is the Future of Marketing…