Tesla Has Revealed Its New Roadster, the Quickest Car in the…


Tesla prepared everyone yesterday for the Semi truck reveal, and it certainly delivered an impressive vehicle capable of carrying 80,000 pounds of cargo. What we didn’t expect, though, was a brand new version of the Tesla Roadster brought on stage in the back of a Semi.

Tesla is claiming the new Roadster is the quickest production car in the world, and it’s hard to argue against that when looking at the base specs. The Roadster will accelerate from 0 to 60 mph in just 1.9 seconds. Zero to 100 mph takes 4.2 seconds, and quarter mile acceleration is 8.8 seconds. Then there’s the top speed, which hasn’t been revealed yet but is north of 250 mph. As for wheel torque, it’s gauged at 10,000Nm. 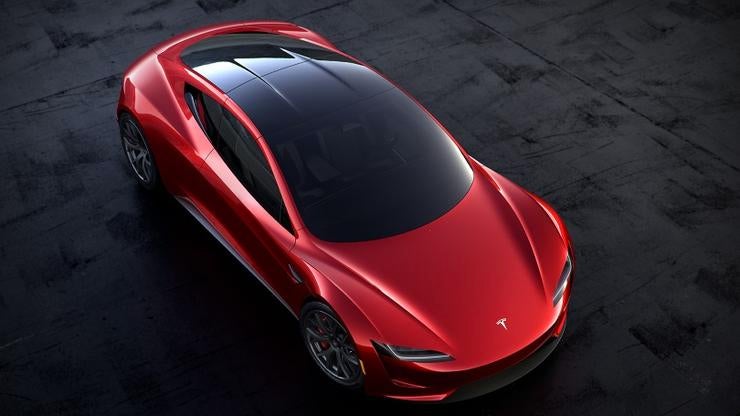 So the Roadster is fast, but Tesla doesn’t seem to have compromised to achieve the speed. It’s an all-wheel drive supercar that can seat four people and travel 620 miles on a single charge. The glass roof is removable and stored in the trunk making it a convertible, and I doubt anyone would argue about how great it looks.

For this level of performance, especially with a Tesla badge attached, you can expect to pay a small fortune to own one. The base price will be $200,000 with a $50,000 deposit required. There is also a Founders Edition costing $250,000, of which only 1,000 are set to be offered. Regardless of how quickly you can get that $50,000 deposit together, Tesla won’t deliver the new Roadster until 2020.

Before anyone scoffs at the $200,000 price point, keep in mind the performance on offer and the competition it beats. Look at any of the new supercars in development by Mercedes, McLaren, Ferrari, Lamborghini or Bugatti, and prices start at $500,000 before quickly going up into the millions. Tesla has them all beat.

@[email protected]
Previous Bitcoin and Other Cryptocurrencies: the Next Shiny Object or…
Next 10 Reasons Why You Shouldn't Join a Startup…