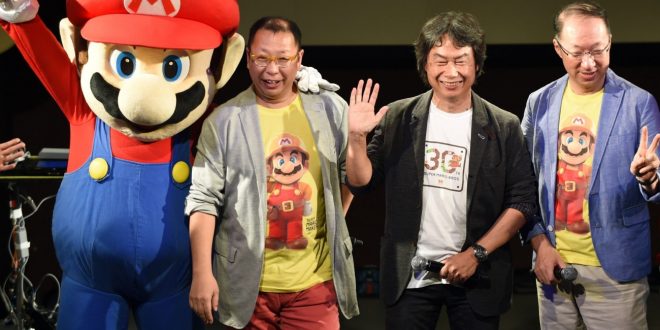 Why You Won't Be Playing Super Mario Bros. in VR Anytime Soon…

While Sony will debut a virtual reality add-on for the PlayStation 4 this October, it sounds like Nintendo’s anticipated debut of its next games console will not incorporate the buzzy technology. In other words, there will be no virtual immersion into Mario’s Mushroom Kingdom — at least not any time soon.

At Nintendo’s annual shareholders meeting on Wednesday, president and CEO Tatsumi Kimishima asserted that while the company is researching VR technology, it is choosing to focus its efforts on the impending launch of its next console, codenamed the NX, scheduled for a March 2017 release.

Forrester Research forecasts that 52 million units of VR head-mounted displays will be in use in the U.S. by 2020. But in its recent report on virtual reality, Forrester touched on the balance between “overheated hype” and “excessive VR skepticism.” It seems that Nintendo, in investigating but not yet implementing, perceives VR in a similar way.

While its competitors dabble in VR, Nintendo is skeptical as to whether the world is ready to don headsets to play its games. During the meeting, game creator Shigeru Miyamoto, father of Mario, Donkey Kong and The Legend of Zelda, noted that while many gamers spend hours on end in front of their screens, VR headsets are not conducive to such long-term play. The technology has been reported to induce headaches and nausea after prolonged exposure, which also may deter parents from allowing their children to use it.

Miyamoto also said that he did not believe VR was a major talking point during this year’s E3 gaming conference. Ultimately, too few people have had experiences with VR to make it mainstream. The company wants to make sure its users are aware of and excited about the technology before investing heavily in it.

“It takes content-creating companies like us to really make things that the consumers wants to experience, that they want to jump into the particular technology,” said Reggie Fils-Aime, president of Nintendo of America, in an interview with Bloomberg West. “That’s how we move it forward.”

Nintendo has been slow to incorporate trendy tech in the past. A prime example is its use of game cartridges rather than optical discs until the release of the GameCube console in 2001, while other systems used CDs throughout the 1990s. In other cases, Nintendo has led the charge. The company experimented with a VR-like project in 1995, the Virtual Boy, although the endeavor was a failure.

Related: What You Can Learn From Nintendo’s Weird and Wonderful 125 Years

“Though not a commercial success, Nintendo was a pioneer in VR with Virtual Boy, and revolutionized gaming last generation by embracing new motion control technology with the introduction of the Wii,” wrote Liam Callahan, industry analyst for The NPD Group, in an email to Entrepreneur. “Nintendo has always been a company willing to take risks. Regarding their recent reluctance with VR, I believe Nintendo is staying focused on a successful launch of the Nintendo NX.”

Nintendo is open-minded to VR, notwithstanding its caution today. “We want to make sure that our next content is going to be mainstream, mass-market approachable,” Fils-Aime told Bloomberg West. “And when something like VR is at that point, you can expect Nintendo to be there.”

Despite Nintendo’s ups and downs, the company has always shown it wants to introduce the next big thing and stay true to its brand, not just follow the trends.

Managing Your Lawyers as Your Startup Grows

Bill Gates Takes Credit for a Classic Microsoft Game Coming Back, and We're Not Sure If It's a Joke…

How to Improve Your Online Presence…

This Non-Profit Trains Anyone to Box for a Cause, Rethinking Competition and Resilience Along the Way (Podcast)…

Don't Always Go With the 'Experts,' Because Sometimes the Experts Are Wrong…