Today Google is facing an absolutely huge fine thanks to the anti-competitive way in which it presents shopping comparison results through its search engine. That $2.7 billion fine has been handed down by the European Commission, and it counts as the largest they have ever issued by some margin.

According to The Washington Post, the EU decided that Google is abusing its dominant position in the market and that the company, “illegally steered users toward its comparison shopping website.”

Margrethe Vestager, EU competition chief, explained “Google has abused its market dominance in its search engine by promoting its own shopping comparison service in its search results, and demoting its competitors … What Google has done is illegal under EU antitrust rules. It has denied other companies the chance to compete on the merits and to innovate. And most importantly, it has denied European consumers the benefits of competition.” 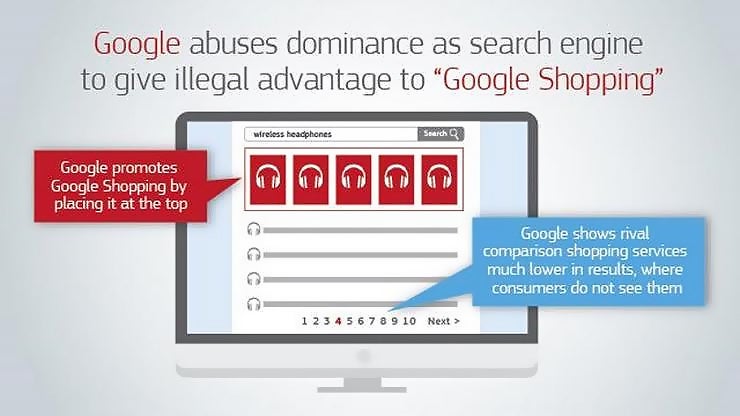 As the European Commission press release explains, it’s how Google presents search results that’s being viewed as illegal. If you do a search for a specific type of product, e.g. shoes, Google will present its own shopping comparison service results first. Below that is advertising followed by other search results where competitors can feature.

By presenting the results in this way, Google is favoring its own service over a more competitive list of results. At least, that’s how the EU views it and they’ve given Google 90 days to stop presenting results in this way. If no change is made by then, penalty payments will be incurred “of up to 5% of the average daily worldwide turnover of Alphabet, Google’s parent company.”

Google, as you’d expect, sees things differently and doesn’t agree with the ruling or the fine. With that in mind, we can expect them to appeal the decision and not pay.

If the verdict is upheld it will mean a fundamental change to the way in which Google presents search results to users of its search engine within Europe. The knock-on effect of that being it will likely generate less advertising revenue from shopping comparison and search results in general.