Filipinos Spent (and Wasted) the Most Time Online in 2018…

A recent report shows the glaring reality of how much time Filipinos spend (and waste) online.

In 2018, Filipinos spent an average of 10 hours a day online in 2018, making the country the home of the world’s top Internet users. That’s an hour longer than the average time spent by Filipinos online on a daily basis in 2017 and four hours longer than the worldwide average.

These are all based on Digital in 2019, a report by social media agency We Are Social and social media management platform Hootsuite, published on January 31. The yearly report provides an overview of the global digital landscape, describing Internet usage and penetration, mobile data access, social media, e-commerce and more.

For the fourth year in a row, the Philippines also emerged as the world’s top social media users. On average, the country’s online population spent four hours and 12 minutes on a social media platform per day in 2018, an increase from three hours and 57 minutes a day in 2017.

With this much time spent online by Filipinos, there are some who can’tÂhelp but wonder if this is due to the country’s strong affinity for social media or if it’s because of our painfully slow internet connection. The latter argument isn’t entirely unfounded. 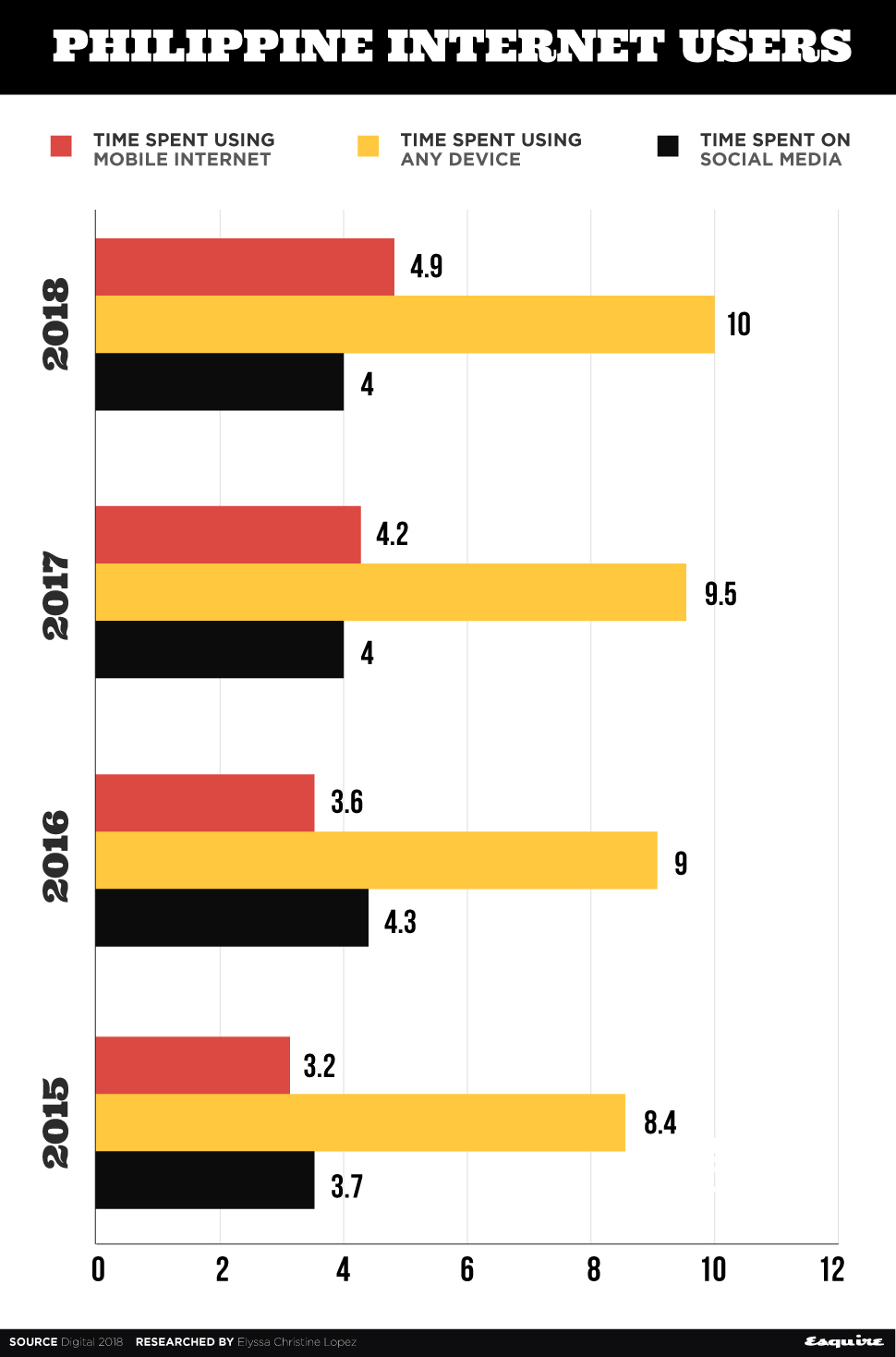 Many countries that recorded internet connection speeds slower than the worldwide average of 54.3 Mbps also emerged as the top countries that spent the most time online.

The Philippines, which had an average fixed internet connection speed of 19 Mbps in 2018, the eighth slowest among the 45 countries studied, ended up as the home of the world’s top Internet users. Indonesia and Colombia, which recorded average mobile download speeds of 15.5 and 16.0 Mbps respectively, are also in the top five countries that spent the most time online last year.

If it’s any consolation, the Philippines’ love for surfing the net has led it to become one of the countries with the highest Internet penetration rates in the world at 71 percent. That is significantly higher than the worldwide average of 57 percent. Still, it’s a long way from the 99 percent penetration rate achieved by other more developed countries like the United Arab Emirates.

Globally, internet users grew by nine percent from the previous period at 4.88 billion or 57 percent of the world’s total population.

“More than 360 million people came online for the first time during 2018, at an average of rate of more than 1 million new users each day,” the report’s author Simon Kemp said. “[And] Trends indicate that all of the original ‘Next Billion Users’ are now online.”