It's a Good Time to Start Investing In Stocks…

The Philippine stock market had a pretty bad 2018.

In fact, a Bloomberg article said that it was the stock market’s worst year since 2008. (And 2008 was a really bad year, considering the world was in the middle of a financial crisis.) It made that claim from the movement of the Philippine Stock Exchange index (PSEi) throughout the year, which serves as the barometer for the over 250 stocks listed in the market.

From the first to the last trading days of 2018, the PSEi dropped by 13 percent and ended the year at 7,466.02. The consistent decline of the PSEi’s level means that a majority of stocks in the market also dropped in value last year. 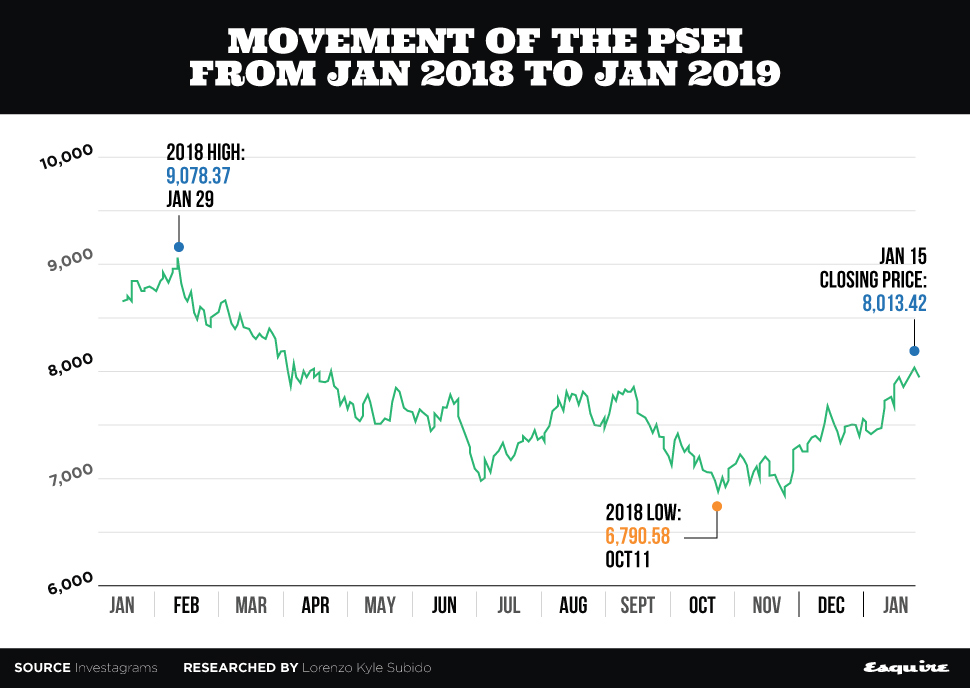 But with a new year comes a fresh start. And while we don’t know if 2019 has been kinder to you than 2018, the Philippine stock market is definitely having a better year so far.

The same Bloomberg article, which was published in the first week of 2019, claimed that the Philippine stock market had the best performing stocks in the world. That’s because the PSEi’s trend had been largely upward by then, and it has continued to steadily rise for the first two weeks of the year.

In fact, it already went past the 8,000 level last Monday, a seven-percent increase from the start of the year. This means that majority of stock prices are on the rise again, and forecasts are optimistic that they will continue to do so.

Bloomberg credited the PSEi’s strengthening to the country’s inflation rate,Âwhich slowed down to 5.1 percent last December. The government is also keen on lowering that further this 2019 to its target range ofÂtwo to four percent.

So if you’re still unsure whether or not you should start investing your money in stocks this year, maybe knowing that you’ll be investing it in what Bloomberg recently said was the “world’s best performing stock market” can help you arrive at a decision.

Don’t know where to start?ÂThis article recaps which stocks performed the best in 2018, despite it being a bad year for the market.

@[email protected]
Previous How to Be Smarter With Money Even If You Don't Have Muc…
Next Cool School: The John Gokongwei, Jr. Innovation Center House…